In 2004, around the time I began re-writing my book about early television (when originally completed, in 1984, it did not reach publication), I made a trip to Washington, DC, to the Library of Congress.

The Library had, available for viewing, two kinescopes of Kay Kyser’s 1949-1950 NBC-TV show.  (There were one or two other telecasts of the program in the Library's collection, yet they had not been transferred to videotape.)

One kinescope I watched was incomplete—it was the first half of the program’s debut broadcast, in December of 1949. The second was a full program, from November of 1950. 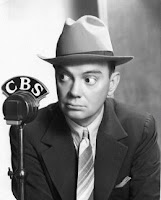 Cliff Edwards, who was also known as “Ukulele Ike,“ was for years a hugely popular performer—on radio, records, and in films.  In 1949, he had a three-times-a-week television show on CBS.

Edwards, who died in 1971, is no doubt best remembered, today, for providing the voice of Jiminy Cricket, in the 1940 Walt Disney film Pinocchio. He sang the movie’s famous song, “When You Wish Upon a Star.”

Here are two YouTube recordings of Edwards singing the song.

The first recording is from the Pinocchio soundtrack. His vocal on the record (which includes his striking and lovely falsetto) is gentle, moving, and beautiful.

I do not know the date of the second recording, but it is also very beautiful.

Georgia Carroll Kyser has passed away, at age 91.  Here is the story from The New York Times:

Georgia Carroll was a well-known model, who then became an actress, and a singer with Kay Kyser's orchestra.  She and Mr. Kyser married in 1944.

Mr. Kyser passed away in 1985. Mrs. Kyser is survived by daughters Kimberly and Amanda, and five grandchildren.
Posted by Andrew Lee Fielding at 4:01 PM

Here is a proposal: that it is time to change one of the ways we remember Dr. Martin Luther King, Jr.

The observance of Dr. King’s January 15th birthday honors one of America’s most magnificent leaders. His “I Have a Dream” speech, from 1963, remains one of the most luminous, most remarkable speeches ever delivered.

Yet the speech, I believe, is in danger of losing its potency. Not because it is in actuality any less powerful, today—but because parts of it, for years, have been relied upon, too reflexively, in news coverage of Dr. King's life.

Whether it has been each January (at the time of the King holiday), or on other occasions over time, news reports about Dr. King (I am thinking largely of television broadcasts) have routinely played brief segments of—usually, certain sentences from—his 1963 address.

Such as, part of the address’s conclusion—in which King looked to the day when “black men and white men, Jews and Gentiles, Protestants and Catholics, will be able to join hands and sing in the words of the old Negro spiritual, ‘Free at last! Free at last! Thank God Almighty, we are free at last!’”

Such words are intensely moving, and meaningful. Yet I am guessing that these, and other segments of the speech, have become the only words of King’s with which many Americans—in particular, younger Americans—are familiar.

In general, as regards history, the notion of repetition has enormous value, reminding us of that which is crucial and profound: the words, facts, images and emotions of the past.

Repetition, of course, can also be used with beauty and power, in the art of rhetoric—as in the recurring “I have a dream” phrase in King’s 1963 address.

Yet repetition—when employed without sufficient care—can also achieve the following: it can help to transform that which is meaningful, or beautiful, or painful, or momentous, into that which we begin, over time (perhaps less than consciously), to take for granted. I believe we have begun taking King’s 1963 speech for granted.

I recently watched various videos of Dr. King on YouTube—interviews from the 1960s, for example, on Meet the Press, The Mike Douglas Show, and other programs. Another well-known video I watched—widely regarded as another of King’s greatest speeches—is the haunting address he delivered the night before his death. (“Like anybody, I would like to live a long life. Longevity has its place. But I'm not concerned about that now…”)

In these different videos, King’s moral force, and his rhetorical force, are gripping. Yet we do not see these other videos often enough.

Through the years, journalistic coverage of Dr. King has, most certainly, been impelled by the best of intentions. Yet the regular reliance upon brief parts of his best-known speech has, I believe, provided a constricted view of his life, and legacy. A new effort to capture a more expansive sense of Dr. King would be a meaningful way to remember one of America’s finest, most vital, and most heroic citizens.
Posted by Andrew Lee Fielding at 1:21 PM

The talented (and beautiful) Anne Francis, who passed away this week (at age 80), was probably best known for her 1965-1966 private-eye television series Honey West.

(Certain childhood memories can be so elusive, indistinct. I watched Honey West, at ages nine/ten, yet recall, in essence, nothing about it—other than remembering that I liked Anne Francis.) 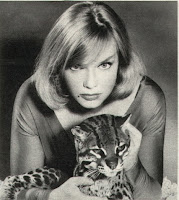 Many will also recall Francis’s enjoyable lead performance in an episode of The Twilight Zone (the story concerned department store mannequins). I’ve never seen the well-known 1956 science fiction movie in which she co-starred, Forbidden Planet, though she had a key role in one of my favorite 1950s films, Blackboard Jungle.
(The film, released in 1955, had as its primary stars Vic Morrow , Glenn Ford, and Sidney Poitier, and is remembered in part for the song used at the start of the film, and used elsewhere in it, as well: “Rock Around the Clock.” The record had been released the year before, but did not achieve huge popularity until it was used in the film. After the release of the movie, it became the first number one rock & roll record on the Billboard pop music charts. Blackboard Jungle, one can therefore argue, played a not-insignificant part in the rise of rock & roll.)
The following is a story about Anne Francis, from The Los Angeles Times: