In December, as previously mentioned, I appeared on a California-based Internet-only radio show, “TV Confidential,” which airs every other week (http://www.tvconfidential.net/). The show’s hosts, Ed Robertson and Frankie Montiforte, are interesting & enjoyable conversationalists, and they know a great deal about television—about TV shows, television history, and the workings of the TV industry.
Robertson is a journalist, commentator, and TV historian; Montiforte is a writer for television, and has also worked in various production capacities in both film and TV.
I’m now reading (and enjoying), incidentally, a book by Ed Robertson—“ ‘This Is Jim Rockford…’ The Rockford Files.”
The book is a history of James Garner’s private-eye TV series (1974-1980), and it includes cast and production credits (and other information) about all of the show’s episodes. While the book, published in 1995 by Pomegranate Press, is now out of print, in 2005 Robertson brought out an updated and much-expanded version of the book, “Thirty Years of the Rockford Files: An Inside Look at America's Greatest Detective Series.” The updated edition is published by ASJA Press, and is available on amazon.com:
http://www.amazon.com/Thirty-Years-Rockford-Files-Detective/dp/0595342442/ref=sr_1_2?ie=UTF8&s=books&qid=1232681046&sr=1-2.
It’s also available at Robertson’s own web site: http://www.edrobertson.com/.
Please note: one of the topics on this Tuesday’s broadcast of “TV Confidential” (10 p.m.-12 a.m. EST) will be the early television series “The Colgate Comedy Hour.”
Posted by Andrew Lee Fielding at 3:34 PM

I originally wrote my book between 1977 and 1984 (while living in Providence, Rhode Island), but that version of the book did not reach publication. When I rewrote the book, between 2005 and 2007, the Internet age had obviously emerged, and this proved extremely useful regarding additional research.
While rewriting the book (and for a number of years prior), I bought various pictures, videos, magazines, and other artifacts from the era of early TV, via the Internet—primarily through the auction site ebay.
A few years before I began rewriting the book, I purchased, on ebay, a segment of a kinescope: it was a five-minute excerpt of a telecast of Kay Kyser’s 1949-1950 NBC show. I have no idea why only that brief kinescope segment had survived, out of an hour-long program—but I was very happy to come upon it. It was the first time I had ever seen kinescope footage from Kay Kyser's program.
I continue to occasionally buy items, on ebay. This past November I bought a kinescope of one of the programs written about in my book: John Conte’s Little Show, a twice-weekly musical program starring singer and actor Conte, which aired on NBC in 1950 and 1951. My mother was a regular guest on the show in 1951; the kinescope I bought featured one of the appearances she made on the program.
(Above right: a listing from a Midwest television magazine, 1951, for John Conte’s NBC show.)
Posted by Andrew Lee Fielding at 10:40 PM

Joan Beloff, and the book "Through the Seasons" 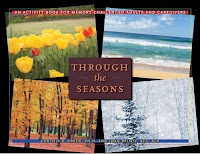 At the end of October, I spoke about early TV at Chilton Memorial Hospital, in Pompton Plains, New Jersey. The talk was part of the hospital's "New Vitality" program (a "Health and Wellness Program For People 50 and Older"). Joan Beloff is the program's Director. She's also director of Community Outreach at the hospital.
I learned this week, via the latest "New Vitality" newsletter, that Joan co-authored a book that was brought out in mid-2008 by Johns Hopkins University Press. The book, Through the Seasons, was written with Cynthia Green, and is a workbook about Alzheimer's disease (and other illnesses affecting memory). Its subtitle is: "An Activity Book for Memory-Challenged Adults and Caregivers."
From the book's description, on amazon.com: "Mental stimulation has been found to offer demonstrable benefits for people with Alzheimer disease, dementia, or other memory impairment. Through the Seasons helps family members and caregivers engage memory-challenged adults in simple, enjoyable activities that provide stimulation and enhance communication."
Here's the book's amazon.com link:
http://www.amazon.com/Through-Seasons-Activity-Memory-Challenged-Caregivers/dp/0801888441/ref=sr_1_1?ie=UTF8&s=books&qid=1231199387&sr=8-1
Posted by Andrew Lee Fielding at 11:05 PM