Unfortunately, no correct answers to the quiz question below were received:

The answer to the question:

Your Hit Parade, which had been a hit show on radio since the 1930s, came to TV in 1950, airing Saturday nights on NBC.

The TV show originally featured two, and then three singers; it settled on its permanent cast of four featured singers in 1953. That cast remained in place until 1957.

In 1957, the show’s four singers were replaced by a group of younger performers.

Between 1950 and 1957, seven featured singers appeared on the Hit Parade. (This does not include Polly Bergen, who briefly replaced singer Dorothy Collins in 1954, when Collins took maternity leave.)

A free copy of The Lucky Strike Papers will be sent to the first person who e-mails this blog (LSPapers@aol.com) with the names of the seven singers who were featured on the show between 1950 and 1957 (before the cast of younger singers took over).

Please include your name and address, along with your answer to this question.
Posted by Andrew Lee Fielding at 8:45 PM

The special $20 sale price, for copies of The Lucky Strike Papers, will now be offered through Saturday, September 27th. For additional information, see the previous post.
Posted by Andrew Lee Fielding at 4:00 PM

A reminder, that discounted (and signed) copies of The Lucky Strike Papers are available through the book's web site: http://www.luckystrikepapers.com/.

The book's cover price is $24.95. Until Tuesday, September 23rd, copies will be available for $20, a price which includes Media Mail shipping, with Delivery Confirmation.
Posted by Andrew Lee Fielding at 11:47 PM 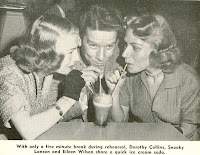 Here's a photo, from a fall of 1951 issue of a Pittsburgh-area TV Guide-type magazine; the picture features the three primary stars of Your Hit Parade at the time: singers Dorothy Collins, Snooky Lanson, and Eileen Wilson.
Interviews with all three singers are featured in The Lucky Strike Papers.
Posted by Andrew Lee Fielding at 10:45 PM

I'm looking forward to speaking about The Lucky Strike Papers at Chilton Memorial Hospital, in Pompton Plains, NJ, on October 30th. The talk is part of the hospital's "New Vitality" program--"A Health and Wellness Program for People 50 and Older"--and will take place at 1:30 p.m., in the conference center at the hospital's Collins Pavilion.