James Stratton, and "North by Northwest"

I recently read a very insightful and enjoyable book about the 1959 Alfred Hitchcock film North by Northwest.  I've seen the film many times, over the years--yet nonetheless learned a great deal about it (thematically, visually, structurally), from the book.  The book, published in April by BearManor Media, is by James Stratton, and is titled "Hitchcock's North by Northwest: The Man Who Had Too Much."

An interview with Mr. Stratton can be heard on my radio program this evening.  The program is heard each Thursday night, on the Internet station "Radio Once More,"  from 9 to midnight (Eastern time).  The address (via which one can hear the program) is:  www.radiooncemore.com.

The conversation with Mr. Stratton will begin airing at some point between 9:20 and 9:45 p.m.
Posted by Andrew Lee Fielding at 5:00 PM

I watched part of the Tony Awards broadcast on Sunday. During the segment in which tribute is paid to Broadway figures who died in the past year, I learned of the death of Virginia Gibson. She passed away in April, at 85. 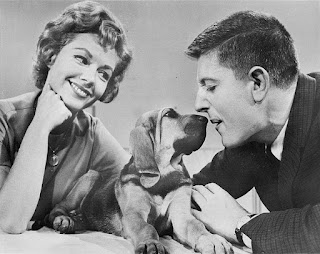 Gibson was a singer, actress, and television host.  She was one of the stars of the 1954 film Seven Brides for Seven Brothers, was a regular on Johnny Carson's 1955-1956 comedy and variety series on CBS-TV, and in the 1960s and early 1970s was the co-host (first, with Frank Buxton, and then, with Bill Owen) of the popular children's TV program Discovery.  In 1957 she was a Tony Award nominee (in the Supporting or Featured Musical Actress category), for her role in the play Happy Hunting.

From 1957 to 1958, she was one of the singing stars of Your Hit Parade, on NBC-TV (along with Tommy Leonetti, Alan Copeland, and Jill Corey). This new, and younger, Hit Parade cast had replaced the longtime stars of the TV program--Dorothy Collins, Snooky Lanson, Gisele MacKenzie, and Russell Arms.

After the 1957-1958 season, Gibson and her fellow cast members left the program. The show then moved to CBS;  the CBS version, which aired in 1958 and 1959, starred Dorothy Collins and Johnny Desmond.

(Photo, above, from 1962, of Virginia Gibson and Frank Buxton, from Discovery, ABC-TV.)
Posted by Andrew Lee Fielding at 6:55 PM

One has watched and read about, with sorrow, and shock, the deadly, wildly destructive tornadoes in Oklahoma.  It is hard to conceive what it is like, to be swept up in--and (if one survives) to then seek to recover from--that kind of cataclysm.

And then, there is the awful destruction--as in the Boston bombings--which comes not from the immense power of nature, but from human agency:  from human cruelty, sociopathy, murderous ideology.
_____

I haven't posted anything, in this space, since the traumatic events of April, in Massachusetts.

A few nights after the Marathon bombings--the grotesque, inhuman, evil acts which were committed--I hosted my weekly radio program, and spoke at some length about what had happened.  Earlier that evening, the video and still images of the suspects had been released.

The next night, there was the battle in Watertown, following the murder of the MIT police officer.   A transit officer was also, of course, gravely wounded, in Watertown.

I remained in front of the TV all night (more than 200 miles away, in northern New Jersey), watching the events in Watertown.

The following week, I spoke a bit more, on my program, about the bombings, and their aftermath.  Yet my words, that evening, felt to me inadequate.

Seven weeks later, I remain just staggered by what took place, continue to feel great sadness about the deaths, and the grievous injuries which were inflicted.

I grew up just outside of Boston, my father lives less than a few miles from where the bombings occurred, and I have talked often, with family, and friends, about the events of April.  During that time I have tried to write a few posts about that which took place, but the words, on paper, have also seemed inadequate, and I have put the writing aside.

Yet while I have felt a kind of paralysis, in seeking to write about the terrible events in Boston, and their aftermath,  I watch, with great admiration, and awe, as those who were directly affected, who were so deeply traumatized (those who lost loved ones, or lost limbs--and those who were otherwise wounded, in both physical or emotional ways), have made clear their determination to move forward:  that they are resuming, or seeking to resume--with bravery and fortitude--the course of their lives.
Posted by Andrew Lee Fielding at 7:53 PM