In the previous post, I referred to author Garry Berman; in 2011 he came out with an enjoyable book about comedian and actor Ed Wynn (Perfect Fool: The Life and Career of Ed Wynn).

I neglected, in the post, to include Berman's web address.  It is: www.garryberman.com

The site features information about Berman's other books--including one about The Beatles that I'm planning on reading.  Its title:  We're Going to See the Beatles!:  An Oral History of Beatlemania as Told by the Fans Who Were There (Santa Monica Press, 2008).

Here is the amazon link for the book: 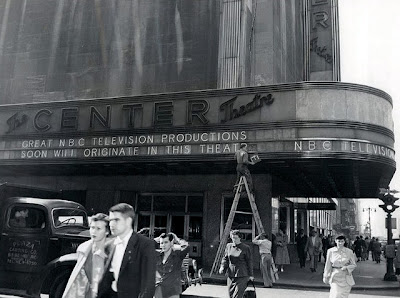 This is a photograph of New York City's Center Theatre, which in the early 1950s, having been taken over by NBC, was the home of a number of NBC-TV programs; NBC shows began originating from the theatre in 1950.  (The photograph is from the web site www.cinematreasures.org.)

I recently interviewed author Garry Berman, on my weekly "Radio Once More" program; we discussed his 2011 book, Perfect Fool: The Life and Career of Ed Wynn (BearManor Media).

Berman writes, in his book, about The Center Theatre; Ed Wynn performed at the theatre in 1950 and 1951, when he was one of the rotating hosts/stars of NBC's Four Star Revue. The other hosts of the television program, in the 1950-1951 season, were Danny Thomas, Jimmy Durante, and Jack Carson.

My mother sang in the theatre in 1951 and 1952, on Your Hit Parade. She also sang there in 1951, on the Freddy Martin television show, on which she appeared as a regular guest.

The TV version of the Hit Parade had originally been broadcast from New York's International Theatre, during the summer of 1950.

The International Theatre had also been acquired by NBC, and, as was the case with The Center Theatre, had been converted into a television broadcast facility. Sid Caesar's Your Show of Shows, which went on the air in early 1950, was broadcast from The International Theatre. (My mother sang at the theatre in 1949 and 1950, when she was a cast member of Kay Kyser's TV show.)

In the summer of 1950, four experimental TV broadcasts of the Hit Parade were aired, and originated from The International Theatre. In October of 1950, when the Hit Parade joined NBC's weekly schedule, the show moved to The Center Theatre. The show was also broadcast from The Center Theatre for most of the 1951-1952 TV season; for part of the season, the program was moved to NBC's Studio 8-H, at 30 Rockefeller Plaza.

In 1954, The Center Theatre was demolished; the site was turned into an office building. The International Theatre was torn down the same year.
Posted by Andrew Lee Fielding at 4:54 PM 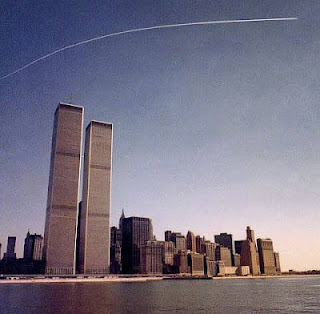 (Photograph, circa 1978, is used by permission of artist Jenny Lynn.)
Posted by Andrew Lee Fielding at 4:10 PM

He was an enormously talented man.