The Freddy Martin Show (also known as The Hazel Bishop Show, after its lipstick sponsor) made its debut on NBC-TV in July of 1951. The weekly show, which continued airing in the fall, starred bandleader Martin, singer Merv Griffin, pianist Murray Arnold, and the vocal group The Martin Men, made up of sidemen from Freddy Martin's orchestra. My mother sang on the show regularly as a guest vocalist.
In this photo, she sings the song "Everything Happens To Me."
Photo, from a video of a kinescope, by Jenny Lynn.
Video/kinescope image used by permission of NBC Studios, Inc.
Posted by Andrew Lee Fielding at 9:02 PM

Two artifacts:
The first: a mailing from 1950, sent to a home in Phoenix, New York. On one side, the card displays the broadcast schedule of television station WKTV, in Utica, New York. The station featured programs from three networks: NBC, CBS, and ABC. On the reverse side of the card is an advertisement for Kay Kyser’s Thursday night television show.
The second: a ticket to the last telecast of Kay Kyser’s program, at New York’s International Theatre, in December of 1950.
Posted by Andrew Lee Fielding at 3:18 PM 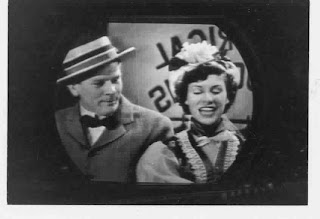 Here's a photo, from January, 1952, of Your Hit Parade (a photo not included in my upcoming book). Pictured: Snooky Lanson and Sue Bennett, singing the song "Down Yonder." The picture was taken of a television screen, as the program was telecast. (photographer unknown)
Posted by Andrew Lee Fielding at 10:56 AM 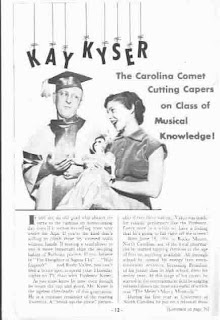 This blog will largely be concerned with my soon-to-be-published non-fiction book, The Lucky Strike Papers, and with its primary subject: the era of early television.
My late mother, singer Sue Bennett, was featured on various network TV shows between 1949 and 1952—including NBC’s Kay Kyser’s College of Musical Knowledge, in 1949 and 1950, and Your Hit Parade (also known as The Lucky Strike Hit Parade), in 1951 and 1952. She also appeared regularly on other NBC programs: bandleader Freddy Martin’s TV show, and Van Camp’s Little Show, which starred singer and actor John Conte.
The book features conversations with singers, bandleaders, comedians, dancers, writers, producers, directors and others from the shows with which my mother was affiliated. It will be brought out later this year by the Georgia-based publisher BearManor Media; BearManor specializes in entertainment-related books, including many about old radio and TV shows.
So: thanks for looking, and please visit again soon!
(Photo: Kay Kyser and Sue Bennett, 1950 issue of TeleVision Guide magazine.)
Posted by Andrew Lee Fielding at 7:24 PM