Jack Ely, of The Kingsmen

I cannot count the number of conversations (sometimes, near-debates) in childhood--and into adulthood--with people I knew, regarding what they believed, and what I believed, the words of the song were. We were all wrong.

The New York Times obituary about Mr. Ely, by Sam Roberts (see link below), notes the following, about the song, and about Richard Berry, who wrote it (and originally recorded it, in 1957): "Mr. Berry’s words, with a first verse that begins, 'Fine little girl she wait for me/Me catch the ship for ’cross the sea,' are in fact completely benign. Whatever obscenities people thought they heard, the Kingsmen’s version hewed closely to the original — lyrically if not musically."

Here is the song--first, as recorded by the Kingsmen, and then, the version by Richard Berry (and The Pharaohs):

The "Other" Ray Charles

In my previous post, I wrote about Milton DeLugg, who died on April 6th, at age 96.  On the same day Mr. DeLugg died, I was sad to learn, Ray Charles died.  He was also 96. 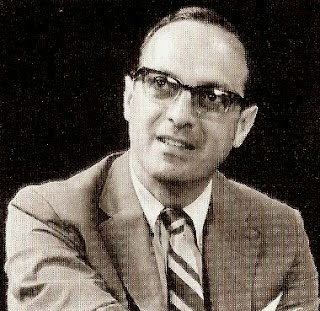 Mr. Charles--often referred to as "the other Ray Charles"--was remarkably talented.  He was a vocal arranger, composer, conductor, writer of special musical material, and singer;  he was, notably, the leader of the vocal/choral group The Ray Charles Singers, well-known for its long association with Perry Como.

Mr. Charles's voice is no doubt most widely known because of a television theme song he sang (with Julia Rinker Miller): the theme to the 1970s and '80s TV show Three's Company ("Come and Knock on Our Door").

In the 1970s and 1980s, he was affiliated with such programs as The Muppets, and Sha-Na-Na.  A brief tune he wrote for Perry Como's TV show--"Letters, We Get Letters"--was later used, for years, on David Letterman's program.  For three decades, beginning in the early 1980s, he served as a musical consultant to the Kennedy Center Honors programs.

In addition to appearing for many years with Perry Como--on Mr. Como's TV shows, and on his records--The Ray Charles Singers accompanied countless other vocalists, on records.  There were also many Ray Charles Singers albums, over the years, and a song recorded by the group, "Love Me with All Your Heart," was a big hit in 1964.

As I wrote in my book:


The Ray Charles Singers was not a fixed entity, but an umbrella name for a group which changed according to musical circumstances. A particular group of singers might be hired for Perry Como’s TV show (Charles himself was not one of the singers on Como’s TV program), while other singers—perhaps including Charles himself—might be used for recording dates.

During her years in New York, my mother worked with Mr. Charles in a few capacities: in 1951 and 1952, when she was a vocalist on Your Hit Parade; in 1949 (as noted recently, in this space), as one of his Ray Charles Singers, on the CBS-TV variety show Inside USA with Chevrolet; and as one of The Ray Charles Singers in a handful of recording sessions.

I first interviewed Mr. Charles in 1979, in Warwick, Rhode Island.  He and a group of his singers were touring with Perry Como, who was appearing at the Warwick Musical Theatre; at the time I lived nearby, in Providence.  Mr. Como's opening act, at the time, was comedian Jay Leno, who was twenty-nine years old.

I interviewed Mr. Charles again in 2005, two years before my book came out.  The interviews he gave me added a great deal, I believe, to the book.  I am very thankful for the time he gave me, and for the insights, and memories, that he shared with me.

He joined the Hit Parade TV show, as vocal arranger, in 1950, the year the program came to television.  The following is from my book:

“The camaraderie on the Hit Parade was quite incredible,” he told me. “It was really a family, because there were no stars. Dorothy [Collins] was new, Snooky [Lanson] was new. In the beginning, the first year or two, I can’t remember, Eileen Wilson was the other lady singer. . . Then Russell [Arms] and Sue [Bennett] did commercials, then they started crossing over into doing productions, the songs. And really, for about, I would say at least three years, it really was a marvelous family. And then, I don’t know, it kind of—it happens, I suppose, where the closeness goes. . . . But it was a constant party the first three years. After every show we would go to somebody’s house, somebody would have a party . . . ”  Each week, he said, “we would watch a kinescope of the previous week’s show. And it was like a picnic, you’d yell and scream. This was a new medium to everybody, and they wanted to watch and see what they were doing, if they were doing it right, how they could improve, and we were all very interested . . . . But it was fun, because we would applaud and talk and laugh. It was home movies, really, is what it was.”

Here is a link to a previous post, about a photograph (either from 1950 or 1951) of the cast of Your Hit Parade.  The show's Hit Paraders, at the time, are identified, including singers Artie Malvin, Gene Lowell, Hubie Hendrie, Geri Beitzel, and Rae Whitney.

Here too, is a very enjoyable video of Perry Como and The Ray Charles Singers--singing "Papa Loves Mambo"--from a 1954 Perry Como program.  This is followed by the link to a prior post I wrote about the video.


The YouTube link that follows is of Mr. Charles and Julia Rinker Miller singing the theme to Three's Company:

Lastly, here is the link to a Facebook page about The Ray Charles Singers;  I borrowed the photo of Mr. Charles, above, from the Facebook page.

I was very saddened to learn, yesterday (via Bobby Ellerbee's "Eyes of a Generation" Facebook page), about the death, on Monday, of Milton DeLugg.

I remain very grateful that I was able to interview him, for my 2007 book about early television.  We spoke a few times, a couple of years before the book came out.  He was extremely kind, cheerful, and gracious.

Mr. DeLugg wrote a number of hit songs, in the early 1950s--including "Be My Life's Companion" (written with Bob Hilliard), "Hoop-Dee-Doo" (with Frank Loesser), and "Shanghai" (with Bob Hilliard).  "Orange Colored Sky," a hit in 1950, was written by Mr. DeLugg and Willie Stein.

In 1950, DeLugg was the bandleader on (and was well-known for playing the accordion on) network TV’s first late-night hit show, Broadway Open House. He played “Orange Colored Sky” regularly on the program.

The star of Broadway Open House, comedian Jerry Lester, recorded a version of the song, prior to the recording made famous by Nat King Cole and Stan Kenton. A version was also recorded by Betty Hutton.

In their book, The Complete Directory to Prime Time Network and Cable TV Shows (Ballantine Books, several editions), authors Tim Brooks and Earle Marsh write that DeLugg’s frequent performances of “Orange Colored Sky,” on Broadway Open House, led to this distinction: that it was “probably the first song ever to become a hit through television exposure.”

Here is the song, as recorded (so beautifully) by Nat King Cole, and Stan Kenton's orchestra:

Here, too, is a video of Mr. DeLugg accompanying Al Jolson in August of 1949, during a Chicago appearance:

According to the description of the video, on YouTube, Al Jolson's appearance in Chicago was part of a tour related to the release of the movie Jolson Sings Again, which starred Larry Parks, as Jolson; the film (released the same month as the Chicago performance) was the sequel to 1946's The Jolson Story.  Mr. DeLugg was seen briefly in Jolson Sings Again: he played the accordion, with a small musical group, during a Jolson appearance at an overseas military post.  Here is a link to the film; Mr. DeLugg is seen at about 28:30.

Please note not simply the skill, but the verve, and the swinging style, with which Mr. DeLugg played the accordion in the film's scene. Indeed, Mr. DeLugg told me that he sought to bring to the instrument--an instrument he began playing in his teens--something of the musical style, the musical feeling, of Benny Goodman's band. "I was so struck by that wonderful band, and the swing music, and I was trying to play accordion like that."

Here, lastly, is the Wikipedia page about Mr. DeLugg: