I had a terrific time appearing on Boston radio station WBZ on Sunday night—and not simply because, having grown up in the Boston area, I listened to the station throughout my childhood, and beyond.

And I learned, during our conversation, about a point of intersection, regarding family history.

I have written, in previous posts, about the ocean liner the S.S. United States. It made its first voyage–from New York to England—in 1952. The last broadcast of NBC’s Your Hit Parade, for the 1951-1952 TV season, originated from the ship; this was five days before the ship’s maiden voyage. It turned out—though she did not know it at the time—that my mother’s appearance on the S.S. United States was to be her last appearance on Your Hit Parade.

During the interview, Morgan told me that his grandfather, in the 1950s, had been a steward on the S.S. United States. I loved learning about this—that we both have a once-removed connection to this legendary American ship.
Posted by Andrew Lee Fielding at 3:17 PM

This Sunday (April 20), at midnight, I'll be appearing as a guest, via phone, on Boston's WBZ NewsRadio (1030 AM). I'll be interviewed about The Lucky Strike Papers by guest host Morgan White, Jr. He's sitting in that night for host Steve LeVeille.

As I mentioned in the preceding two posts, my mother hosted a show on WBZ-TV, "The Sue Bennett Show," in 1954 and 1955. In 1956, the year I was born, she was co-host of another TV show on the station, a weekday morning program, "Morning Playhouse." Her co-host was the legendary Boston TV personality Rex Trailer.

(Above right: advertisement from TV Guide, September, 1956, for "Morning Playhouse")
Posted by Andrew Lee Fielding at 11:26 AM 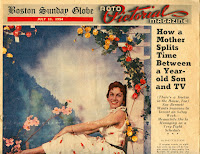 Seen here is a 1954 story from the Boston Globe's Sunday magazine, during the time my mother was singing on her weekly "Sue Bennett Show," on Boston's WBZ-TV; this was two years after she sang on NBC's "Your Hit Parade." My parents had left New York--and my mother had left behind her network TV career--at the start of 1953.
The year-old son referred to in the story's headline is my brother, who was born in 1953. I came along later, in 1956.
Posted by Andrew Lee Fielding at 3:15 PM

It was thoroughly enjoyable speaking to the “Radio Collectors of America,” last Thursday night. The group meets in Quincy, Mass.; I was interviewed by phone by the group’s Vice President, Mel Simons. Others, including the group’s president, Bob Forrest, asked enjoyable questions following Mel’s interview.
One man, whose name I didn’t catch, said he thought he'd seen my mother on a particular TV show in Boston—this being after my parents left New York, and my mother’s network TV career was over. I had trouble hearing the question—it had to be relayed to me by Mel—yet the details the gentleman offered didn’t ring a bell; it seemed to me he was probably thinking of someone else.
Yet after the phone call was over, I thought about the question, and wish I could have spoken with the gentleman further; if his memory was right, and there had been a particular Boston TV show she had appeared on that I was not aware of, I would have enjoyed hearing more about it.
Above right: a newspaper advertisement for my mother’s weekly musical show (in 1954 and 1955) on Boston’s WBZ-TV. The show’s vocal group was led by musician Freddy Guerra; in the 1940s, Guerra (a clarinetist and saxophonist) had played in Glenn Miller’s Army Air Force Band.
Posted by Andrew Lee Fielding at 7:39 PM