Mr. Carter was a very talented comedian.  He died on Sunday, at 93.

I noted, in a posting yesterday, that the organizers of the Orson Welles-related crowdfunding campaign--a project undertaken to raise funds to complete Welles's 1970s film The Other Side of the Wind--are seeking $1 million for the project; originally, the goal had been $2 million.


In a news update on the campaign's Indiegogo page, six days ago, the project's organizers announced that they had secured a matching grant.  If the $1 million goal is met, when the fundraising period concludes in nine days, the project, according to the organizers, will be receiving an additional $1 million from the unnamed donor.
Posted by Andrew Lee Fielding at 3:50 PM

Orson Welles: "The Other Side of the Wind," and autobiographic fragments

A fundraising effort has been underway since May--via the crowdfunding site Indiegogo--to complete The Other Side of the Wind, the unfinished 1970s film by Orson Welles.

A May 7th New York Times article about the effort noted that the producers involved with the film project--as well as Peter Bogdanovich, one of the film's stars--were "hoping to raise at least $2 million by June 14 to help pay for editing, music and other postproduction costs."

As of this writing, more than $275,000 has been raised.  The financial goal has been revised;  $1 million is now being sought.  The fundraising period, too, has been extended; it will end in ten days.  I am hopeful that the campaign will reach its goal.

(A note about this particular fundraiser: it is described, on its Indiegogo page, as a "flexible funding" project.  Unlike some crowdfunding efforts, in which donors only pay if the financial target is reached, all of the funds pledged to the Orson Welles project-- whether the $1 million goal is achieved, or not--will be allotted to the campaign.) 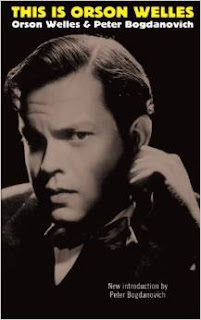 In recent years I've become increasingly interested in the work and life of Mr. Welles--drawn in particular to his extraordinary film career, as director, writer, and actor. Recently, after watching films by Welles, on television (such as The Stranger, The Magnificent Ambersons,  and A Touch of Evil), I have consulted--with enjoyment--the book This is Orson Welles, to learn more about the particular films.  The book, which first appeared in 1992, features lengthy conversations about Welles's work, between Welles and Peter Bogdanovich  (Mr. Bogdanovich, of course, is himself known as the director of such exceptional films as Paper Moon, The Last Picture Show, and What's Up Doc?).

Another story about Mr. Welles, by the way, recently appeared in the news.  As a May 20th New York Times article noted:  "Archivists at the University of Michigan said this week that they have discovered extensive fragments of, and notes for, a Welles autobiography in a trove of papers newly purchased from Oja Kodar. Ms. Kodar, a Croatian actress, was Welles’s companion in the years before he died in 1985."

(Image above: cover of 1998 edition of This is Orson Welles, published by Da Capo Press)
Posted by Andrew Lee Fielding at 10:15 PM

It's always a pleasure receiving my copy of Radiogram, the Old-Time Radio magazine/newsletter; eleven issues are published each year, by the California-based OTR organization SPERDVAC (the Society to Preserve and Encourage Radio Drama, Variety and Comedy).  The June issue arrived with today's mail, and I look forward to reading it. 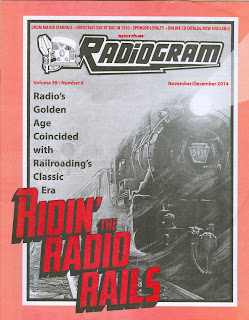 Radiogram is edited by Patrick Lucanio.  Dr. Lucanio's books include two written with Gary Coville: the 1998 book American Science Fiction Television Series of the 1950s (published by McFarland), and 2002's Smokin' Rockets: The Romance of Technology in American Film, Radio and Television, 1945-1962, also brought out by McFarland. (In 2009, by the way, Mr. Coville wrote a kind review of my book, in Radiogram.)

Dr. Lucanio is also the author of 1987's Them or Us: Archetypal Interpretations of Fifties Alien Invasion Film, published by Indiana University Press.

Here are the amazon.com links for the above books:

The cost of a subscription to Radiogram is $15 per year.  Additional information about the publication can be found on the SPERDVAC website:

(Above image:  November/December 2014 issue of Radiogram)
Posted by Andrew Lee Fielding at 4:18 PM