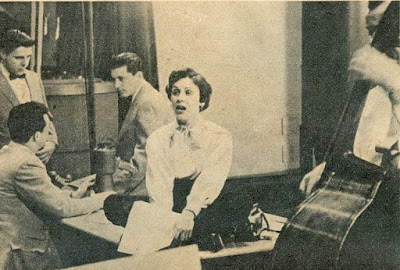 These are rehearsal and publicity photographs from The Sue Bennett Show, a weekly musical program on Boston station WBZ-TV (Channel 4).  The show aired in 1954 and 1955, and featured my mother and the vocal group The Freddy Guerra Trio.

As was true of a number of early television's musical shows (one thinks of network programs starring Perry Como, Dinah Shore, and Roberta Quinlan), The Sue Bennett Show was fifteen minutes long.

The first picture, above, is from a 1954 Boston Sunday Globe story. The photo (cropped, at the bottom, because of damage to it) shows my mother rehearsing a song; the bass player is to the right of the table.  The Freddy Guerra Trio is at the left.

The next three photos are also from 1954.  In the picture below, The Freddy Guerra Trio rehearses before the television cameras (the singers are dressed, for the particular number, in western outfits); my mother watches, near the center/rear of the picture. 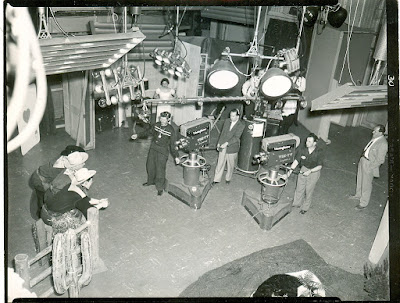 In the third photo, my mother is seated to the left; musicians from the show can be seen, off-camera, to the right. 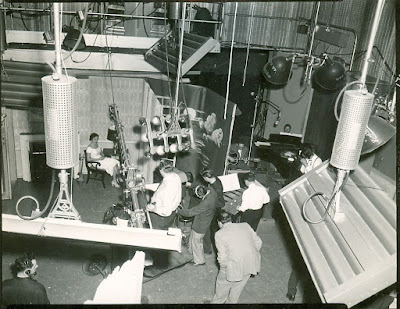 The next photo is a portrait of The Freddy Guerra Trio. From the top to the bottom are: Charles Bean, Freddy Guerra, and Joe McPherson. 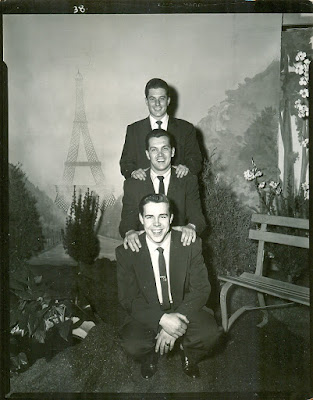 Though he performed as a vocalist on the show, Freddy Guerra was best known as a musician, and bandleader.  He is familiar to Glenn Miller fans for having played saxophone with Miller's Army Air Force Band during World War Two. After the war, Guerra played both saxophone and clarinet with The Glenn Miller Orchestra, now led--due to Miller's death, during the war--by vocalist and saxophonist Tex Beneke.  Guerra later led his own orchestra, for many years, in the Boston area.

The final photograph is from a 1955 story from The Boston Sunday Post; my mother is sitting on a piano, during a rehearsal for the show. 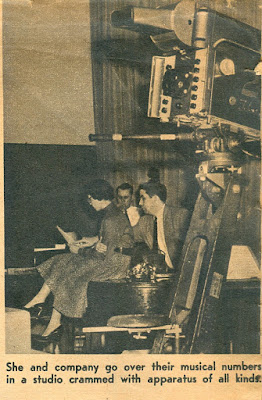 The fine singer Vic Damone died on February 11th.  He was 89.

The following is a video/kinescope of Mr. Damone, from YouTube.  It is from an April of 1949 telecast of the DuMont Network's Morey Amsterdam Show.

Morey Amsterdam's program, a variety show, made its debut on CBS-TV in December of 1948.  Its setting was the fictional "Golden Goose Cafe," and its cast included Art Carney (who played Charlie, the cafe's doorman).

The show was cancelled by CBS in March of 1949, and reappeared the next month, on the DuMont Network  Its setting became the (also fictional) "Silver Swan Cafe"; Art Carney now portrayed "Newton the Waiter."  The show aired until 1950.

The appearance by Vic Damone took place on the show's debut broadcast on the DuMont Network. He sang with The Johnny Guarnieri Orchestra, which was featured on both the CBS and DuMont versions of Morey Amsterdam's program.

Here is the New York Times's obituary of Mr. Damone: