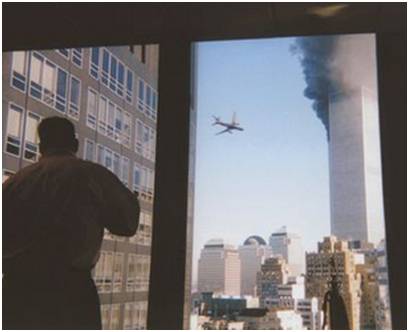 I posted the above photograph last year, on the anniversary of September 11th.  I thought I would post it again.

It is, I think, a haunting image--that of the second airliner, a moment before it crashed into the South Tower of the Trade Center.

The picture was not published until 2002.  As I wrote last year: The picture, taken by Will Nuñez, appeared in the September 2002 issue of Vanity Fair, with other previously unseen images of the September 11th catastrophe, in an article titled "Two Towers: One Year Later." Mr. Nuñez's photograph also appeared in a book released the same month, Here is New York: A Democracy of Photographs (Scalo Verlag Publishers).


The caption in Vanity Fair noted, in part: "After the first plane hit Tower One, bond analyst Will Nuñez went to his corner newsstand and bought a $14.99 disposable camera, hoping to record the scene for history's sake.  Minutes later, from his downtown office window, he captured United Flight 175 as it sped toward Tower Two."