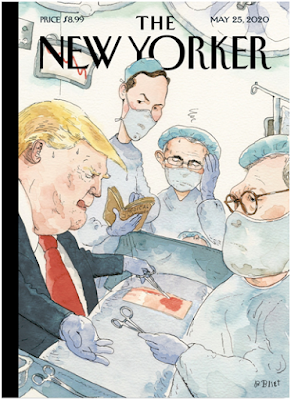 Barry Blitt is an outstanding artist/satirist/humorist. His work is featured regularly in The New Yorker; it appears often, notably, on the magazine's cover. This month, Mr. Blitt was awarded the Pulitzer Prize for Editorial Cartooning.

His cover for the magazine's latest issue, published on Monday, is titled "Natural Ability."

The title (as noted in a New Yorker story, below) comes from remarks President Trump made in early March, during his coronavirus-related visit to the CDC, in Atlanta.

Mr. Trump said to reporters, at the time: "People are really surprised I understand this stuff.  Every one of these doctors said, 'How do you know so much about this?'  Maybe I have a natural ability."


The new issue of The New Yorker was published, as it happens, the same day Mr. Trump announced that he has, for more than a week, been taking hydroxychloroquine, the drug he has promoted for some time.


Here is a brief interview with Barry Blitt, conducted by Françoise Mouly, the art editor of The New Yorker; the interview appeared yesterday, on the magazine's website:

Incidentally, if you are unable to see it clearly, the title of the book being held by Jared Kushner, in Mr. Blitt's drawing, above, is "Medical Handbook."