Martin Grams, Jr., "The Big Show," and "Truth or Consequences"

In a March 6th post, I mentioned the author and historian Martin Grams, Jr., and his forthcoming book about The Big Show, the early 1950s radio variety program. The show, which starred Tallulah Bankhead, aired on NBC from 1950 until 1952. 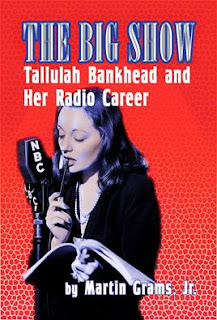 Martin's book about the radio show is scheduled to be published in September--as is his book about the program Truth or Consequences, which aired for years on both radio and television.

I asked Martin about both books, in a recent e-mail.  He told me he's hopeful both will be released in time for the Mid-Atlantic Nostalgia Convention, which runs this year from September 15-17. (He will be making presentations at the convention about both shows.)  The convention--run by Martin and his wife Michelle--takes place in Hunt Valley, Maryland.

Martin has written a great many books about radio and television programs; his subjects have included The Twilight Zone, the Sam Spade radio show, The Shadow, The Green Hornet (a book written with Terry Salomonson), and The Time Tunnel.