I’m very pleased to note that the S.S. United States, the legendary ocean liner, is now owned by the S.S. United States Conservancy, the organization which has, for some time, led a campaign on behalf of the ship’s preservation.  The Conservancy acquired the title to the ocean liner at the beginning of February.
The ship, which has not been in use since 1969, has been docked, since 1996, on the Philadelphia waterfront. I wrote in a post last year that the fate of the ship (which had been owned since 2003 by the Norwegian Cruise Line company) was in doubt. The cruise line, it had been reported, was considering bids, for the ship, from scrap companies. 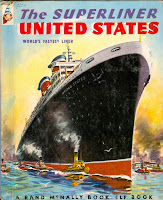 In 2010, the S.S. United States Conservancy received a $5.8 million gift from H. F. “Gerry” Lenfest, the Philadelphia philanthropist. The money provided by Mr. Lenfest paid for the purchase of the ship—the cost was $3 million—as well as providing for 20 months of maintenance fees.
The Conservancy said, on its website: “Owners Norwegian Cruise Line/Genting Hong Kong entered an exclusive purchase option with the Conservancy last year, graciously declining a bid twice as high from a vessel scrapper, in order to support the Conservancy’s efforts. The Conservancy is deeply grateful to both Gerry Lenfest and Norwegian/Genting for their support.” (Genting is one of the parent companies of NCL.)

As I have noted previously in this space (and as I wrote in my book), the final telecast of the 1951-1952 season of Your Hit Parade, on NBC, took place on the ship, five days before its maiden voyage.

Here is additional information about the purchase of the ship. The last link is to a New York Post piece by Dan McSweeney, the S.S. United States Conservancy’s executive director.
http://online.wsj.com/article/SB10001424052748704254304576116223089782038.html
http://www.ssunitedstatesconservancy.org/news/_/2011/2/conservancy-purchases-ss-united-states-through-grant-from-lenfest-foundation/
http://www.nypost.com/p/news/opinion/opedcolumnists/saving_an_icon_of_the_american_century_R5twq9IWy1ZbjhIVjwzVOK
(Above: cover of the 1953 children's book The Superliner United States, published by Rand McNally & Company.)
Posted by Andrew Lee Fielding at 3:15 PM