Harold Russell, and "The Best Years of Our Lives"

The film earned eight Academy Awards in 1947, including the award for Best Picture.

Harold Russell, a World War Two veteran, had previously made only one film appearance; he was featured in a brief 1945 War Department film about disability and rehabilitation. Yet he received 1947's Best Supporting Actor award, for The Best Years of Our Lives. Director William Wyler said that Russell "gave the finest performance I have ever seen on the screen."

Russell was also given a second Oscar in 1947, an honorary award, for "bringing hope and courage to his fellow veterans."

As The New York Times wrote, upon Mr. Russell's death, in 2002:  "After basic training [during World War Two], he volunteered to become a paratrooper, and he learned that skill as well as demolition.  The United States Army made him an instructor.  On June 6, 1944, while some of the men he trained were involved in the D-Day landing, Mr. Russell was teaching demolition work at Camp Mackall in North Carolina and a defective fuse detonated TNT that he was holding.  The next day what was left of his hands were amputated three inches above the wrists.

"Walter Reed General Hospital offered him a choice of prosthetic devices: plastic hands or steel hooks.  He chose the hooks, proved unusually adept at mastering them and eventually made a training film for soldiers who had lost both hands. The film, 'Diary of a Sergeant,' showed Mr. Russell in daily activities.

"Wyler saw the film after he had been asked by the producer Samuel Goldwyn to direct 'The Best Years of Our Lives.' Wyler urged Goldwyn to hire Mr. Russell, and after some coaxing Mr. Russell, who was then attending business school at Boston University, agreed to appear in the film."

The Best Years of Our Lives--and Mr. Russell's extraordinary performance in it--can be seen tonight at 10:15 (Eastern time), on TCM.
Posted by Andrew Lee Fielding at 5:41 PM

In October of 1953, singer Julius La Rosa--who died May 12th, at age 86--was part of one of the most interesting, and most peculiar, moments in broadcasting history.   He was fired--live, on the air--by his boss, television and radio giant Arthur Godfrey.

The show was Arthur Godfrey Time, a morning program simulcast on CBS Radio and TV--although La Rosa's dismissal, from the Godfrey family of entertainers, was not seen by television viewers. The TV portion of the simulcast had ended, for that day; the firing was heard only by Godfrey's radio listeners.

At the end of the show--after La Rosa, at Godfrey's request,  sang the song "Manhattan"--Godfrey told his audience the following:

"Thanks ever so much, Julie.  That was Julie's swan song, with us.  He goes now, out on his own, as his own star, soon to be seen in his own programs.  And I know you wish him Godspeed, same as I do."

Andy Rooney, who wrote for the program, said, in an interview years later for A & E's Biography program, that La Rosa asked, after leaving the stage, "Was I just fired?"

Godfrey later said that the dismissal took place because La Rosa had come to lack "humility."

The relationship between Godfrey and La Rosa had deteriorated--at least in part--as a result of a couple of incidents.

Godfrey, during this time, had insisted that his family of performers take dance classes, to help with their sense of movement, on-stage.  La Rosa--who in addition to appearing on Godfrey's morning TV/radio show also appeared on the weekly TV program Arthur Godfrey and His Friends--missed one of the classes, due, he said, to a family matter.  Godfrey then suspended him for a day.

As Arthur J. Singer writes, in the biography Arthur Godfrey: The Adventures of an American Broadcaster (McFarland & Company, Inc., 2000):  "La Rosa insists he had gone to see Godfrey to tell him he had a family conflict and that Arthur had seemed to understand but told him to try to get back if he could."

Singer continues, regarding the suspension:  "La Rosa was enraged.  He went over to the Lexington Hotel, where Godfrey lived, and had the operator ring his room.  He was told Godfrey was out.  But Julius had seen his car on the street and decided to wait for him to come down to the lobby.  Finally, according to La Rosa, Godfrey came down with two of his assistants and brushed by La Rosa without acknowledging him.  'I said to myself, Okay.  So I went and got a manager and...an agent."

Godfrey did not want his "Little Godfreys"--as the performers on his shows were called, collectively--to hire agents or managers; he preferred to deal with his performers directly, and had made this known.  Soon, Godfrey received a letter from the agent, Tommy Rockwell, of General Artists; the letter, Arthur J. Singer summarizes, said that "in the future, all dealings with La Rosa would be handled through the agent's office."  In an interview, years later--seen on A & E's Biography--La Rosa spoke about the letter.  It was, he acknowledged, a "big slap in the face" to Godfrey.  Godfrey--with the approval of executives at CBS--decided to fire La Rosa; it was agreed the firing would take place on the air.

The public firing, and Godfrey's subsequent remarks to reporters about La Rosa's lack of humility, were not well-received.  For years Godfrey had been known for his generally easygoing, genial manner.  His public image--as commentators have noted, over time--was certainly affected by the controversy; the episode, to many, suggested an unlikeable, perhaps imperious, side to his personality.

Here is a YouTube video featuring part of the 1996 A & E broadcast of Biography, about Arthur Godfrey (its Executive Producer was Godfrey biographer Arthur J. Singer, referred to above).  The video includes the audio recording of the firing, as well as interviews with La Rosa, and others, about it:

Here, too, is an obituary about Julius La Rosa, from The Washington Post:

"The Girl on the Train" 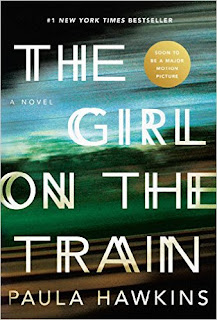 Saw an ad on television, Sunday night, for the upcoming film The Girl on the Train. It stars Emily Blunt, and will be released in October. I loved the novel, by Paula Hawkins--was really taken by it--and hadn't known a film based on it was forthcoming.  Am looking forward to seeing it.

Here is the imdb.com page about the film:

And here is the novel's amazon link: