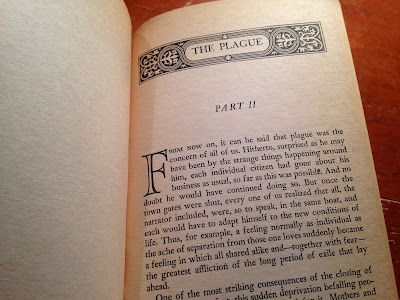 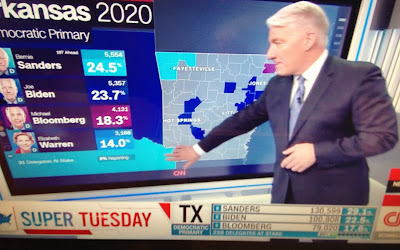 One of the recurring pleasures of election nights has, for some time, been John King's reports and analyses in front of CNN's touch screen electoral maps. The maps are referred to, during CNN's election broadcasts, as the "Magic Wall."

King is the network's Chief National Correspondent. His knowledge of electoral maps--of the histories, patterns, and intricacies of states, counties, Congressional districts, and other electoral corridors and regions within the states--is substantial, and his presentations are routinely impressive, and illuminating.

I'm looking forward to watching his reporting tonight, as returns come in from primaries in Michigan, Mississippi, and elsewhere.

This is a photograph taken in Philadelphia, at my request, by photographer/artist Jenny Lynn, a longtime friend. The picture was taken on Thursday, early evening, from inside the IKEA store, located on Philadelphia's Columbus Boulevard.

In the distance is the S.S. United States, the legendary passenger liner, which has been out of service since 1969, and has been docked on the Philadelphia waterfront since 1996.  The ship is, in person, a startling and remarkable sight.  At 990+ feet in length, it is more than 100 feet longer than the Titanic.

In 2011, the ship was purchased by the S.S. United States Conservancy, a group devoted to the ocean liner's preservation, and history. The Conservancy bought the ship from Norwegian Cruise Line, which had acquired it in 2003; the company had had plans--ultimately not realized--to make the ship seaworthy again.

The purchase of the ship, by the Conservancy, was made possible by a substantial donation to the group, from the noted Philadelphia philanthropist Gerry Lenfest.  Mr. Lenfest died in 2018, at age 88.

Here is the link to the Conservancy's website:  http://www.ssusc.org/

As noted previously in this space, the S.S. United States is written about in my book about early television.  The last telecast of NBC's Your Hit Parade, for the 1951-1952 season--which was, it turned out, my mother's last appearance on the program--took place on the ship.  Five days later, on July 3rd of 1952, the ship began its maiden voyage.

The book is Truth or Consequences: The Quiz Program that Became a National Phenomenon (published by BearManor Media).

The program was created by Ralph Edwards; Edwards was its host on radio, and was the original host of the TV version of the show (when it was seen in prime time).  Bob Barker, who was host of the TV show for a number of years (for its daytime version, and then in syndication), wrote the foreword to the new book. 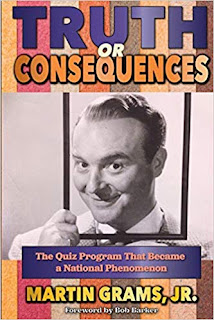 I've written about Martin Grams periodically, in this space; he has written (or co-written) a great many books about Old-Time Radio, and vintage television programs. The books include The Twilight Zone: Unlocking the Door to a Television Classic (2008); The Radio Adventures of Sam Spade (2007); The Green Hornet: A History of Radio, Motion Pictures, Comics and Television (2010; written with Terry Salomonson); Duffy's Tavern: A History of Ed Gardner's Radio Program (2018); Car 54, Where Are You? (2016); and The Time Tunnel: A History of the Television Program (2012).

Martin is a prominent figure in the Old-Time Radio and nostalgia-oriented communities. His articles about Old-Time Radio programs appear regularly in various OTR publications--and he writes about radio, television, film, and other popular culture matters on his blog (http://martingrams.blogspot.com).  He's the editor of Radio Recall, the journal of the Metropolitan Washington Old Time Radio Club; the publication appears six times each year. In addition, he and Michelle Grams, his wife, have for years run the annual Mid-Atlantic Nostalgia Convention, based in Maryland.

Yet he is undoubtedly best known for his book projects--and in particular, for the considerable research skills he brings to them. Indeed, the books routinely include vast amounts of archival and historical materials he has located, and mined. As such, his books often have an encyclopedic feel, in their scope, and length.  His Twilight Zone book, one notes, is 800 pages long.  His book about Duffy's Tavern is just under 800 pages.  His newest title, about Truth or Consequences, continues the tradition: it comes in at just over 700 pages.

Kirk Douglas, who died on Wednesday at age 103, was a wonderful actor.

He was also a noted film producer, and wrote many books--including The Ragman's Son, a 1988 memoir; a 2002 memoir, written after his severe 1996 stroke, My Stroke of Luck; and 1997's Climbing the Mountain: My Search for Meaning. He also wrote fiction.

Here is a quote from Mr. Douglas's New York Times obituary.  It is from an essay he wrote about aging, in 2008, for Newsweek magazine.

“Years ago I was at the bedside of my dying mother, an illiterate Russian peasant. Terrified, I held her hand. She opened her eyes and looked at me. The last thing she said to me was, ‘Don’t be afraid, son, it happens to everyone.’ As I got older, I became comforted by those words.”

Tony Charmoli, early television, and the memoir "Stars in My Eyes"

The picture, below (from the television program Your Hit Parade), appears in the 2016 book Stars in My Eyes, by Tony Charmoli.  I had not seen the picture (a picture I like a great deal) prior to reading Mr. Charmoli's book.

The book, about Mr. Charmoli's life and work, covers his career in entertainment from the 1940s until the 1990s (including his extensive work as both a choreographer and director for television). Today, Mr. Charmoli is 98, and lives (as he has lived for years) in California.


The above picture is seen in the chapter of Stars in My Eyes about Charmoli's work in early television.  He first gained notice, in early TV, as choreographer for the ABC program Stop the Music; he became the show's choreographer in 1949, while dancing in a Broadway show.  In 1950, he joined the new NBC show Your Hit Parade, as choreographer, and remained with the program for several years.

Charmoli, however, was not only the Hit Parade's choreographer. He was also--as noted, here, in previous posts--the show's stager.  The songs on the Hit Parade, each week, were not simply sung, in a straightforward manner; they were dramatized. It was Charmoli who--in addition to choreographing the program's dance routines--staged all of the show's song dramatizations; he staged the movements of the featured singers and supporting performers, whether the numbers contained dance routines or not.

Charmoli received a 1956 Emmy Award, for his choreography during the show's 1955 season.  In the 1970s, he received two additional Emmy Awards for choreography, for specials starring Shirley MacLaine (1976), and Mitzi Gaynor (1974).  From the 1950s until the 1990s, he received a number of other Emmy nominations, for his work both as a choreographer and director.  Singer Snooky Lanson, who starred on Your Hit Parade from 1950 until 1957, told me, in a late-1970s interview, that Charmoli was "one of the greatest talents I believe I ever knew."

The 1952 Hit Parade picture, above, is not captioned, in Charmoli's book. It features (from left-to-right, front row), singer Eileen Wilson; a pianist whose name I do not know; my mother (singer Sue Bennett); singer Dorothy Collins; and the show's director, Clark Jones. Charmoli is seated behind the pianist. I don't know the identity of the man standing next to Charmoli, in the back row.

The singers and the pianist (as can be seen by the sheet music on the piano's music stand) are rehearsing the song "A Guy is a Guy," which was a hit, in 1952, for Doris Day. There is also, one notes, what looks like a folder, on the table in front of Dorothy Collins and Clark Jones. The name Bob Kitsis is printed on it; Mr. Kitsis, at this time (and for much of the 1950s), was the pianist on the Hit Parade telecasts, as part of the Lucky Strike Orchestra, led by Raymond Scott. The pianist in the photograph, however, is not Bob Kitsis.

In that the setting of the photograph does not appear to be that of a standard rehearsal studio, I am guessing the photo was taken at Manhattan's Hotel Woodstock, where some of the Hit Parade's rehearsals were held each week, during this period.

Stars in My Eyes is published by TurningPointPress, of Teaneck, New Jersey.  Paul Manchester edited and designed the book, and is a friend of Mr. Charmoli; it was Mr. Manchester, Charmoli writes in the book's acknowledgements, "who insisted this book should be written, then took it upon himself to persuade me to get a computer at the age of 90 and start typing out my memories."  Mr. Manchester kindly provided me with a high-resolution file of the above photograph.

The picture, from Mr. Charmoli's photo archives, was taken by Roy Schatt, who worked on the Hit Parade as a still photographer.  (Mr. Schatt later became particularly well-known for photographs he took of the actor James Dean.)

Here is the amazon.com page for Stars in My Eyes:

Below, too, is additional information about Mr. Charmoli's television career, at the website IMDB.com. (Near the end of the IMDB page, in a section titled "Other Works," under the "Personal Details" category, some of Mr. Charmoli's work on Broadway is also listed.)

Paul Manchester, editor (as referred to above) of Tony Charmoli's 2016 memoir--and a two decades-long friend of Mr. Charmoli--has told me that despite online references to the contrary, Mr. Charmoli is 98 years old, not 97, as I had written.  My thanks to Mr. Manchester; the post has been corrected.
Posted by Andrew Lee Fielding at 12:16 PM